For those who have wanted to get their hands on a Onewheel board but have been put off by the price and possibly even the weight, Future Motion has introduced a new generation product that considers these factors. The sleek ergonomic aesthetics, strong motor, and rad technological features keep the Onewheel Pint a force to be reckoned with, but don't worry, this thing is still constructed like a (little) tank.

When compared to other One Wheel models, the Onewheel Pint is almost identical to the Onewheel in terms of specifications. It's a little, short-distance personal transporter that's ideal for college students who are tired of walking about campus, short trips to work, and coffee shop visits. Onewheel enthusiasts will be ecstatic at the $1500 price tag, which is far less than its predecessors. Onewheel Pint, on the other hand, did not emerge from the shadows of the expensive, long-range OnewheelPlus XR or the now-defunct OnewheelPlus. In the fourth generation, it has its personality and presence, carving out a new lineage for the Onewheel family.

Let's have a look at the specifications. The Onewheel Pint uses the same 750w Hypercore Motor as the OnewheelPlus and OnewheelPlus XR, so there's no need to sacrifice power for size. It has the typical 30-degree lean maximum for inclines, Future Motions' self-balancing technology, and a range of 6-8 miles, comparable to an OnewheelPlus.

The price point of Onewheel Pint, which starts at $1500, is one of the key talking points online. Beginners, teens, and the budget-conscious can now possess the gnarly technology and rad power of Onewheel Pint thanks to Future Motion's creation of a board outside of the premium price bracket. It's a 'complete game-changer!' as Future Motion puts it.

While the Ultimate bundle is approaching premium costs, getting an Onewheel Pint already equipped with a fender bumper, rail guards, Maghandle, and a Pint Ultra charger will save you money on purchasing the parts separately and incurring shipping fees afterward.

Future Motion has gone all out with this board's clean and basic design. It includes the Sure stance footpads, coarse grip tape, and optional Onewheel fender, but it also has a smaller, rounder 10.5 in x 4.5-6 in Onewheel tire and a new-look color palette. It's a more polished, less engineering-focused product than previous generations, and it shows in its stunning appearance. It's also without the need for a remote this time.

The new LED light system between the wheel and the front footpad is a nice touch. The LEDs display important information such as battery percentage and sense pad indication, among other things. Rather than relying on the app, it creates a cool way to gather feedback from the board (or a remote).Onewheel Pint, on the other hand, still has the wicked front headlamps and the rear lights to highlight the terrain ahead of you while you demolish it. Some things are simply too good to be changed.

Customers can choose from a set of three color waves for their frame rails when ordering an Onewheel Pint: sand, slate, and powder blue. The rails feature a pattern-coated finish that makes them extremely durable and resistant to wipeouts.

There's something incredibly cool about hopping onto a board like the Onewheel Pint for the first time and riding it. There's no synchronizing and no buttons, so it's not a problem. It's similar to surfing, snowboarding, and skating in that all you need is a board and the correct terrain to have a good time. Aside from its ease of use, the Onewheel Pint boasts a unique Simple stop dismount technology that allows beginners to securely get off the board. The board comes to a stop as the rider leans back on his rear foot, allowing for a safe step off rather than a jump. On the app, you can turn this mode on or off.

The smaller wheel on the Onewheel Pint gives it a poppier, sharper ride, according to those who have tried it. Although it lacks the maximum speeds of prior generations, the carving is tighter, and its more compact size and lighter weight make it seem quick.

Any Onewheel rider will tell you that running out of juice in the middle of a ride and having no place to charge is not a pleasant situation to be in. Nobody enjoys hauling their Onewheel over lengthy distances. That's why Onewheel Pint has a cool 'Maghandle.' It's a built-in fold-out handle that makes it easier for riders to carry the board while they're not riding it. It folds up and fits into the coved slot on the side of the wheel when not in use.

The board's weight of 23 pounds makes it far more pleasant to carry than prior generations, especially when using the handle carry method. Its proportions allow it to fit under your desk at work or under a coffee shop table. 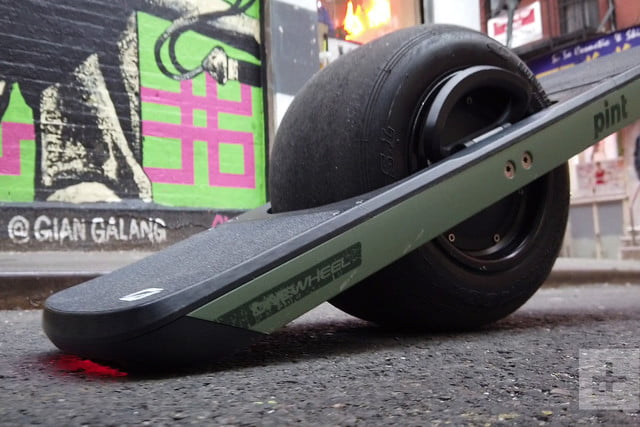 Onewheel Pint is a (more) cheap electric personal vehicle for anyone who has to commute a short distance to work, cross a college campus, or get a caffeine fix. It has Simple stop dismount technology to make it easy for newbies to dismount, and it doesn't come with a remote, so all you have to do is climb on and ride. It's rather light and portable, and it's constructed of long-lasting materials. Onewheel Pint may be customized in terms of color, which adds to the excitement of the board by allowing you to make it your own. This little beast is equipped with everything you'll need to keep your local travel costs low and ecologically benign for the foreseeable future.